Luna and the Law of Property

The attention that Space Law has been receiving shows no sign of diminishing.  I was recently pointed to an excellent article looking at this, entitled "The peaks of eternal light: A near-term property issue on the moon", written by by Martin Elvis, Tony Milligan and Alanna Krolikowski.  I ought to mention that Tony is a friend of mine through the British Interplanetary Society and I greatly admire his profound and learned approach to these issues.

I thoroughly recommend it to anyone interested in these issues.  The article describes regions of Luna, the Moon, that constantly, or almost constantly, receive permanent sunlight due to the relatively small tilt of our sibling world compared to the ecliptic.  These points have been given the poetic and entirely suitable name of the Peaks of Eternal Light and they have the potential to be valuable territories as an installation on them, near the north and south lunar poles, will receive solar energy effectively all the time.

I was further intrigued by their reference to the Outer Space Treaty ("OST"). As many will know, the OST makes it clear that nation states cannot appropriate, or own, territories on Luna or elsewhere in outer space. According to Article II of the OST, nation states cannot make any claim of sovereignty, by means of use or occupation, or by another means.  It is immediately clear to a practising lawyer that this is a total prohibition of any claim to own part of the surface of Luna.  Prohibiting a claim of sovereignty by use or occupation means that landing on or building on part of the surface does not entitle you to make a claim for ownership just because of those facts. In English law, for example, this would prevent a claim for "squatters' rights" based on factual occupation of land.

The authors go on to refer to Art XII of the OST, which states that:

"All stations, installations, equipment and space vehicles on the Moon and other celestial bodies shall be open to representatives of other States Parties to the Treaty on a basis of reciprocity. Such representatives shall give reasonable advance notice of a projected visit, in order that appropriate consultations may be held and that maximum precautions may be taken to assure safety and to avoid interference with normal operations in the facility to be visited."

The authors seek to use this provision to propose that a "loophole" or ambiguity can be implied that weakens or even avoids the total prohibition on any claim to sovereignty set out in Art II.  In brief, the requirement that those seeking entry to a base need to give notice before doing so and cannot interfere with the installation's normal operations suggests to the authors that the owner of a base has some form of right or claim to the area their base occupies as a result. So, for example, this might be used by the creators of a site at the Peaks of Eternal Light to suggest that they have some form of property right to the valuable territory that they occupy.

The OST seeks to encourage the exploration and use of Luna and other parts of outer space, as is made clear by Art I, as long as this for peaceful purposes.  Nothing in the OST seeks to prevent or discourage peaceful installations, bases or buildings on Luna or elsewhere.  Indeed, Art XII itself envisages just this sort of activity.  One of the themes of the OST is that exploration and use of Luna, for example, is to be on the basis of peaceful co-operation between the nation states and their citizens.

When I read Art XII, as a practising lawyer it immediately reminded me of clauses in land law and especially those relating to landlord and tenant.  You may build on the Moon, it suggests, but anyone else can at any time request permission to enter your building.  From time to time I have given talks on the Outer Space Treaty and I always refer to Art XII as a practical demonstration of the total lack of any property rights  of anyone building on Luna.  Think of your home being subject to a law that anyone else, no matter who, could at any time demand entry to your home.  I mention this in the context of how unattractive the position is for those seeking to commence an industrial or commercial operation on Luna, involving perhaps mining its resources.  In real terms, your ability to keep such an operation secretive to some degree is restricted by this point.

Art XII reminds me of typical provisions in a lease particularly because of the important qualification given to this right of entry, which the authors seek to suggest might provide the basis for "quasi-property" rights.  Such rights of entry are almost always, except in emergencies, subject to reasonable advanced notice and this is generally for the purposes of expediency, so as to avoid unnecessary difficulties and awkwardness. Turning up seemingly at random and demanding instant entry would be an easy way to create hostility and argument and so unsurprisingly such clauses require the person seeking entry to give reasonable advance notice.

Art XII adds to this requirement for advanced notice by stating that this is so consultations may take place and precautions may be taken to assure safety and to avoid interference in normal operations.  These additional qualifications further illustrate this point; they are there so that the occupier of a base (for example) must allow entry to other parties if they so require but there ability to do so must be managed in such a way as to avoid confrontation and inconvenience. It seems the length of notice that is reasonable can vary according to circumstances. For example, a complex and potentially dangerous industrial process at a base could lead to a longer period of notice prior to entry than say an innocuous astronomical station.  Far from giving the occupier of a base any sort of claim to property rights, these qualifications on the right to entry merely seek to ensure that it is exercised in a way that helps to fulfil the broader aims of the OST in peaceful co-operation between space explorers and users.

Ultimately, the occupiers of a base on the surface of Luna would not be able to rely on these provisions to prevent someone else entering their premises completely as at some point, no matter what the circumstances, a reasonable period of notice will expire.

The requirement to give notice before entry does not, by itself, qualify or weaken the total prohibition of any claim to sovereignty set out in Art II OST.  Against Art II's total prohibition on property rights of any sort, the requirement to give notice in my view simply fails to provide a firm, or indeed any, basis  for any claim or right that can be founded in law.

Of course in reality the creator of such an installation or base may assert their claim in practical terms based purely on their occupation and this might have a great deal of force to it, especially while the surface of Luna remains largely unclaimed.  Yet this would not be a legal argument.  There would be no basis for such a claim in the OST or Space Law more generally.  Any attempt to maintain occupancy or control of an area would have to involve the use of non-legal means, which would presumably start with simply refusing to allow anyone else any form of access.

The authors seek to partially ground their submissions in a broader jurisprudential theory often associated with Ronald Dworkin.  If there are seeming lacunae in the law, this theory suggests, a Judge can utilise broader social and cultural norms to consider the point in more detail. If a Judge has perfect wisdom based on a perfect understanding of all cultural, social and other norms, such an imaginary champion being referred to as Judge Hercules, they will undoubtedly arrive at the perfect answer to any legal problem even if the primary legislation being considered seems ambiguous.   In reality, actual human Judges may not arrive at the same answer as Judge Hercules, or even each other (as is often the case), but there is at least the principle that there is a perfect answer to each legal question.

This attractive and comforting theory has some practical underpinning in the noted principle that Judges (at least in the jurisdiction of England and Wales) are expected to arrive at a judgement on a legal dispute even if the law or evidence or both have unsatisfactory elements, such as gaps in the primary law being considered.

Yet this does not mean that Judge Hercules can therefore be expected to make the law up in the absence of legislation.  A Judge seeking to resolve a dispute about access to the Peaks of Eternal Light would have to, at some point, note that the regime of the OST only goes so far and then stops.  From the perspective of someone seeking to exercise property rights over the surface of Luna , the law states that they do not have any and the Judge cannot go any further than that.

The authors speculate that the Chinese government could commence a mission that would conclude with a site being installed at one of the Peaks of Eternal Light and might then seek to rely on the OST in the way they propose to exclude anyone else from this territory.

To bring matters to a head, let us say I form a company registered in the jurisdiction of England and Wales and I then obtain the appropriate license from the UK government in accordance with the Outer Space Act 1986  to carry out operations in outer space.  I decide that this company is to land a human mission near the Peaks of Eternal Light and then seek access to the Chinese base in accordance with Art XII.

What is the way forward, given that the OST and the current Space Law regime more generally does not provide any particular mechanism for considering these issues?  In looking into this, I have been researching the law of the sea bed.  Here, the International Seabed Authority ("ISA") manages the exploration and exploitation of the deep sea bed. This was created by the United Nations Convention on the Law of the Sea, also known as the Law of the Sea Convention.

The exploitation of the mineral resources in polymetallic nodules to be found on the sea bed is a key area that is managed by ISA.  ISA licenses operatives from convention countries to carry out these sorts of operations and emphasis is placed on environmental mitigation.  ISA has its own enterprise organisation to carry out such exploitation as well, although in practice it has yet to carry out substantial work in this area.  Though the ISA and its activities are certainly not free from controversy, it does provide a practical example of how the exploitation of Luna, along with outer space more generally, might proceed.

Given the complexities in this area, the authors of the article are keen to qualify their conclusions about the law and those interested in this field will value this detailed examination.  If the resources of space are to be utilised, it will be interesting to see how the legal regime develops to manage these activities.

Those interested in reading about these issues further may be interested in this article from the Space Review on a legal regime for the Peaks of Eternal Light: http://www.thespacereview.com/article/2423/1 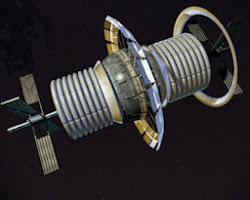 A first step to the settlement of space.